TRANSHIPMENT AT THE CENTRE OF THE WORLD 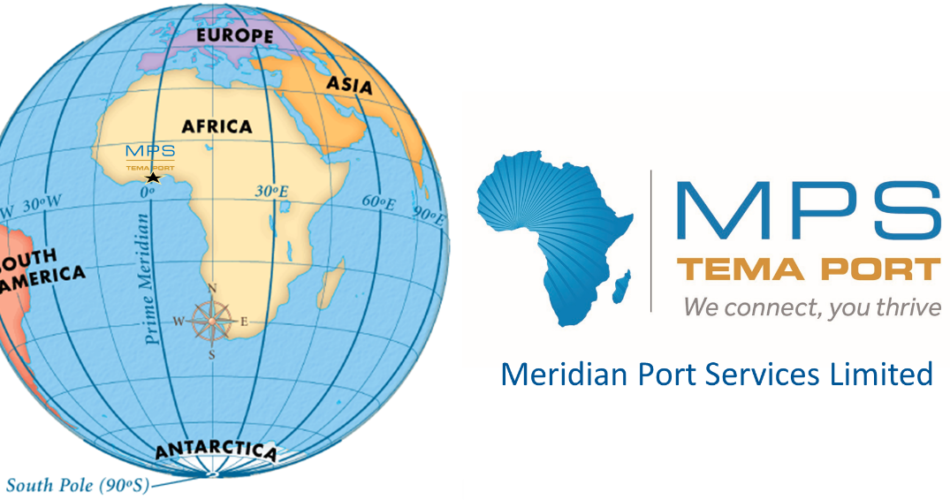 It was in 1884 that the Greenwich Meridian was established at the International Meridian Conference held in October 1884 in Washington, D.C. as the line of zero Longitude forming the basis for navigation and time keeping throughout the world.

Running from the North to the South Pole and separating the Eastern Hemisphere from the Western. This Prime Meridian Line (0° E/W) passes through the centre of the Harbour Basin of MPS Terminal 3 at Tema Port, which is the closest point on Earth to the Centre of the World where the Greenwich Meridian Line (zero degrees longitude) crosses with the Equator Line (zero degrees latitude).

MPS is the leading Container Terminal/Port in West Africa by virtue of its location at THE CENTRE OF THE WORLD as well as its commitment to continuous improvement in infrastructure, superstructure and the service levels provided to stakeholders with the best of the world’s technology to boost its operations.

Once more the MPS superb investment in creating valuable opportunity to the shipping lines has been put to good use in connecting continents and effectively serving markets thanks to the enabling infra & super structure of MPS Terminal 3.

Chief Executive Officer of MPS Mr. Mohamed Samara mentioned some of the key developments at the MPS Terminal 3 leading to the attainment of the status of a shipping hub; “The efficiency, accessibility, the short waiting time at anchorage, fast vessel turnaround time, higher port capacity and berth availability are the optimal criteria for making Terminal 3 a hub on the west coastline of Africa. Moreover, MPS Terminal-3 has the best synchronised frequency of calls (berthing Windows), number of shipping lines, highest volume per vessel call in West Africa making it the ideal first port of call with the shortest trade transit time and transhipment hub.” Said Mr Samara.

The MSC NATASHA started her voyage from the Far East port of Dongguan Anch in the early hours of 14th October and stopped at several ports starting with 21 hours call at Chiwan on the 15th October then 1 day and 10 hours stay in Singapore on the 22nd October followed by another 13 hours stop at Colombo on the 27th October.  She then proceeded on a direct call to West Africa going around the Cape of Good Hope stopping at Lomé on the 12th of November and arrived in Tema on 18th November at 06h00 and sailed by midday on the 19th November.

Besides the many thousands of containers that had been loaded and offloaded at the various port stops, the MSC Natasha discharged and loaded at MPS Terminal 3  a total of 3,524 TEUs of gateway volume to Ghana and the neighbouring landlocked countries but more interestingly MSC Natasha brought with her 2,200 TEUs that belong to South America.

The 2,200 TEUs of transhipment containers will stay at MPS Terminal-3 for few days and will be loaded on MSC ALBANY to be shipped to the respective final country of destination in South America (mainly Brazil).

MSC NATASHA was built in 2011 and her length overall (LOA) is 366 m, beam is 48 m. Her Gross Tonnage is 141,649 Tonne with container capacity of 13,556 TEUs. She is one of 15 vessels operated by MSC on this Far East-West Africa weekly service that enjoys a berthing window arrangement at MPS’ Terminal 3.